A Game of Thrones Board Game

A board game based on A Game of Thrones, a novel now adapted to an HBO series
3-6 players take command of the Great Houses of Westeros
Updated second edition, incorporates elements of past expansions

King Robert Baratheon is dead, and the lands of Westeros brace for battle. Can you claim the Iron Throne? A Game of Thrones Board Game is a classic game of warfare, diplomacy, and intrigue for three to six players. Taking control of the well-known characters from George R.R. Martin’s beloved fantasy series, players must fight for dominance of the realm. Will you take power through force, coerce your way onto the throne with persuasive speeches, or rally the townsfolk to your side? With opportunities for strategic planning, masterful diplomacy, and clever card play, this game gives you a host of ways to spread your influence over Westeros.

A Game of Thrones: The Board Game Second Edition 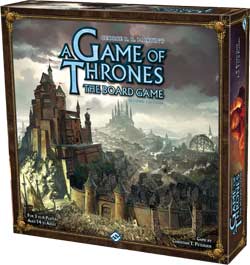 A game of warfare, diplomacy, and intrigue, based on George R.R. Martin’s fantasy novels. View larger.

Based on the bestselling fantasy novels by George R.R. Martin (now a hit HBO series), A Game of Thrones: The Board Game draws players into a war-torn world of sun-scorched sands, lush forests, and chilling northlands. Each player takes control of one of six Great Houses of Westeros, then sets out on an epic campaign of combat and politics to secure total dominance.

This board game includes clear, detailed rules to guide you through setup and gameplay. Play begins when each person receives an army of footmen, knights, siege engines and ship units as well as a set of order tokens and other necessary components. Each player also receives a deck of unique house cards, which represent important characters from A Song of Ice and Fire and are used as leaders in battles against rival houses.

A Game of Thrones: The Board Game captures the most memorable elements of George R.R. Martin’s popular series. The detailed board represents an accurate map of Westeros, and the tokens and cards convey many of its most significant locations and characters. Attractive marbled plastic figures shaped as footmen, knights, ships, and siege engines display your military might to the realm while contributing to the game’s overall medieval aesthetic. 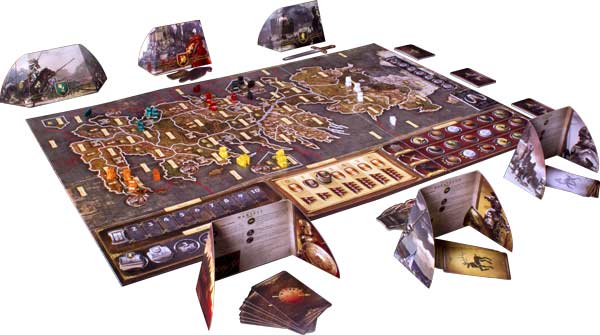 Game board is enhanced with figures, battle cards, tokens, and overlays.

Raise Your House to Dominance

Game play proceeds over the course of ten rounds, after which the player who has claimed the most areas containing castles or strongholds is declared the winner. If at any time throughout the game a player controls seven such areas, that player may immediately claim victory.

Each round in the game is made up of three phases: the Westeros Phase, the Planning Phase, and the Action Phase. The Westeros Phase represents special events and the day-to-day activities in Westeros. In the Planning Phase, players secretly assign orders to all of their units. This portion of the game emphasizes diplomacy and deduction. Can players trust their so-called allies, or is a timely betrayal in the making? Finally, during the Action Phase, orders are revealed, alliances crumble, and fierce battles decide the players’ fates. 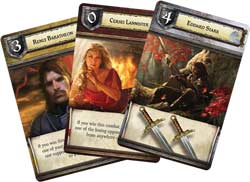 House cards include characters from
A Song of Ice and Fire. View larger. 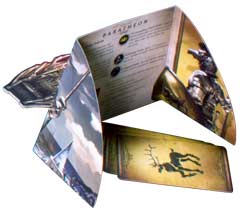 A World of Intrigue, Diplomacy, and Warfare

Fragile alliances will form and break over the course of each game, as players promise support to neighboring Houses only to betray them for their own selfish ends. But beware; as the war unfolds, the barbaric Wildings (which are controlled automatically by the game) work to amass their forces in the far north. Players must occasionally set aside their differences to face a common foe–or face the consequences together.

A Game of Thrones: The Board Game draws you into a vibrant gaming world, bringing your favorite characters to life. The board resembles paint on distressed parchment for an old-world look, while the token and card art exhibits intricate detailing fans of the novels will recognize and enjoy.

What’s in the Box

A board game based on A Game of Thrones, a novel now adapted to an HBO series
3-6 players take command of the Great Houses of Westeros
Updated second edition, incorporates elements of past expansions
Features a streamlined rulebook and updated art
Includes welcome new enhancements like Tides of Battle cards and player screens

There are no reviews yet.

As an Amazon Associate we earn from qualifying purchases.